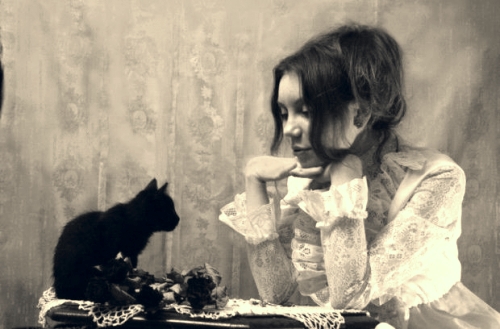 She awoke with the taste of blood in her mouth, curled up in the scummiest corner of the alleyway and wrapped in a large crumpled blanket. Or was it a cloak? She lifted the fabric up and tried to get a better look at it, but something distracted her; her hands.

Her hands. She turned them over and over, trying to make sense of the opposable thumbs, the multiple joints of her fingers, and the softness of them. They were so useless! How was she meant to defend herself with these? Her arms seemed weaker, too, but she was reassured by the fur that still spread down from her shoulder to elbow to the back of her hands. She lifted the cloak off herself to get a better look at the rest of her body.

Her knees were bent the other way, for a start, and her feet seemed completely wrong – so long and flat! She only spent a few seconds noting the new prominence of her mammary glands, then craned her neck over her shoulder to see whether her tail was still there. It was, thank the Gods, and longer than ever.

Her eyes were struggling now with the low light in the alleyway, but her ears were still in the right position on top of her head, and as she twitched them experimentally she was happy to note that she could still hear everything she needed to. But there was something in the way of them… She lifted a hand to her head and lifted some of it up. Dark grey, shoulder length fur – no, hair. Human hair.

She was half woman, half cat. A Beastman.

The voice came from only a few metres away, but in the poor light she found herself squinting to try and see its owner. He was a small boy, perched on a crate and polishing an apple on the side of his trousers, an effort which was probably making the fruit dirtier.

“Come on lovie, find your voice,” he commented, and she realised that she was perfectly able to understand this boy, and probably to replicate the sounds he made. She opened her mouth and moved parts of it uselessly for a few seconds before she found the noises she wanted.

“That’s pretty fast learning, for a cat. Call me Benji.” The boy leant back and bit into his apple. “You’ll need a name too,” he remarked, spraying appley bits in her general direction.

“You’d be surprised how many Beastmen actually used to be animals. I mean, posh people reckon there’s only about three in Europe, but me, I’ve seen three in this very city. Show up out of nowhere, no idea about walking or manners or public decency… Stick with me for a week, you’ll get it.”

Grabbing the cloak up off the ground and wrapping it around her new body, the cat-girl spoke again, more certain of herself now.