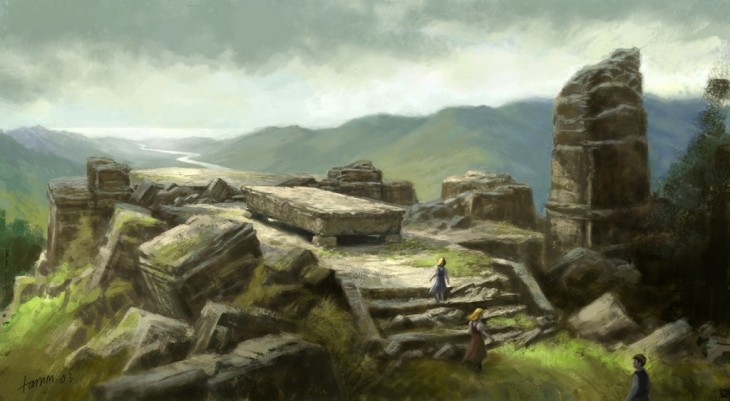 Ready for a sacrifice? The Stone Table in Narnia is calling…
Image Courtesy of Concept Art from the Chronicles of Narnia

Here follows the final moments of Aldrick The Mad’s life written by his scribe, who had been ordered by Aldrick himself to watch from a hidden location and record all that he saw. The scribe was not entrusted with the knowledge of what Aldrick was attempting in the forest, gold was the penniless scribe’s only reason for being present.

“Yes, yes a sacrifice, poetic in your demand. I understand, I understand. Elven by birth, elven she is, eleven too, ha! That’s why I chose her, a little humour between us.

“No, no my lord, not a time for joke, time for joking is not now. Soon we will laugh though, soon in our victory… your victory, you will be the victorious one. Yes victory at last against your sister, our mother, the betrayer of our Lord.

“Betrayed you she did, like the mother of the sacrifice, she never bore a male of your line, honoured though she was with the strongest men your temples could find, she failed them all, but her daughter, she’s survived six years, more than most, but find her I did. She is found and will make a perfect key for your cell, won’t she hmm?”

Aldrick drags the young nameless girl in front of him and lifts the frightened child onto a large, yet cracked stone dais; the centrepiece to the clearing Aldrick now stands in. The clearing is a strange place with an unnerving feel to the air, even the trees surrounding the stone dais seem to grow and lean away from the clearing. As such, the ground is devoid of any life, the soil is dry and black with large cracks, as if the ground had been burnt. The four mercenaries Aldrick has hired to protect him ignore the situation, a couple even twiddle a coin to remind them it’s all about the money.

Tears stream down the gagged girl’s cheeks, and Aldrick ties her down. There are stone hands protruding from the edges of the stone dais as if  grasping for the ropes which tie down the sacrifice.

“Bring the knife, no, no, he disappeared, useless servant, never really useful, fun though, fun to order someone, others don’t listen. These do, these here. You, Mercenary, bring me a knife.”

One of the mercenaries nervously steps forward and hands Aldrick a small dagger, before quickly retreating back to his position.

“Almost ready, almost time. The full moon is high, little importance… no importance, but fitting, fitting my lord for the stories they will tell of your return. Yes the songs and prayers too, all for my lord.”

At the scarred scared land.
A servant of divinity,
A return of infinity.

The fall of the foul brother.
The glory of the strongest,
The victory of the wisest.

It, it is time my lord! Lord, the time comes! The return of the true god to this land, the Ruler of All, All unto his Rule! All shall praise in fear, he returns to us. It is I, Aldrick, who brings him back to us. Speaks to me he does, and now to all.

An arrow strikes Aldrick in the eye. He drops dead instantly. The mercenaries look around confused. Drawing their weapons, they gathered together in a small circle on the edge of the clearance. Seven newcomers enter the clearance, it is a strange party made up of four men, a woman and two elves. Five of the newcomers are equipped with bows which are trained on the mercenaries. The one unequipped man steps forward, calling out to the mercenaries. “Your paymaster is dead, leave before you lose more than your next payment.” The mercenaries share a brief look before scurrying off into the woods.

The newcomers lower their weapons, one also lowers his hood. This man is the only one I can name: Garc, Aldrick’s assistant, who had disappeared two days ago. He checked Aldrick’s body and nodded to the younger elf who bore a scar over his right eye. The elf nodded in return before signalling to the woman who quickly ran to the crying girl on the dais. She untied her, then hugged her tight. Though this woman was not the girl’s mother, the small girl buried herself in the woman’s embrace. The seven companions looked at the girl and then left, taking the girl with them.

Though one of Dice’s older fantasy pieces, we think Aldrick the Mad fits in so well with this month’s theme, that we just couldn’t help but choose it for Inkblots. As can be seen from the beginning of the piece, Aldrick the Mad is part of a larger fantasy world called The Empress. The mythical lore is bountiful within The Empress and, here, Aldrick serves as a short prequel to the main story. Make sure you check out Dice’s recent works, “Keep Smiling Through” and “This One! An Alexander Episode“.