– The gripping conclusion to Inkblots’ two-part post The Bunyip! 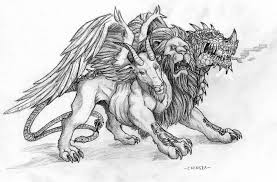 If the bunyip is anything like the mythological creature Chimera, we’re staying well away!
Image Courtesy of hermachine.com

“If I may Mr President,” a coloured man boomed in a deep voice. “I know some lore of the bunyip.”

Calumet looked surprised and gestured at the podium after a moment of hesitation. “Speak freely my boy.”

The man stumbled to the podium and grasped it tightly. Clearing his throat he said, “the bunyip are sea creatures that were thought to have become extinct long ago. They are killers.” Uproar ensued from the crowd, the harsh silence broken. After several minutes, the noise dispersed to a few grumbles, and the coloured man continued. “They cannot be killed themselves, at least not easily. Um, the only other thing I know is that there are a lot of them, at least back when they were a common animal on the land. If they were hiding since then… then I don’t know. I’m sorry.” He hung his head.

“Fear not my friends.” Calumet said with booming authority. “We have done nothing wrong. We should not be harmed by these bunyip. Now, we shall attempt to discern what we can from Jimathon’s pictures. Thebs, will you turn on the screens please?”

Thebs shuffled over to a control panel on the wall and pushed some buttons. The glass screens behind Calumet heated up and the thin metal fibres inside the glass began to wiggle like tiny snakes. Thebs inserted a data chip into the control panel and the metal fibres twisted into focus.

The picture was largely blurred, but one could easily see it was underwater. It appeared to depict the inside of a cave, where a painting hung on the wall. It portrayed a twisted creature, crouched like a dog, with gills along its neck and scales instead of fur. The bones showed clearly beneath the thin flesh, but the head was the most distressing; it was the size of an ostrich egg with a long snout and a large mouth, with gruesome gleaming teeth. Its ruby eyes seemed to leer at the crowd as, one by one, they realized it wasn’t a cave painting, but a creature.

Calumet spoke to a stunned audience, “this was the first picture on the data chip Jimathon gave us. Let us move onto the next picture. If you will the –”

Calumet was interrupted by the doors creaking open loudly. A red-faced police corps general hurried forward, leaped onto the stage and whispered into Calumet’s ear. Calumet nodded and gestured back to the doors. The general hopped down from the stage, stumbled slightly and scurried back outside, shutting the doors after him.

All heads turned back to Calumet, now pale-faced. “I have just been informed that the police corps have encountered a creature similar to this picture. We believe that it is a bunyip.”

The crowd froze and stared as one at the picture. The thought of  that in their lovely town was too terrible to comprehend.

Calumet followed their gaze. “No, no my friends,” he said in a desperate stutter. “These creatures will listen to reason. They are like us; kind and intelligent.” He laughed hysterically for a moment, fooling no one.

Minister Tropic stood up and whispered into Calumet’s ear. “I was just informed that Jimathon woke up again. He said to the staff ‘bunyip don’t bargain. They are the sea.’ I’m worried Calumet.”

Calumet broke off as a massive thump sounded outside, followed by rushing water. A police corps member flung open the doors and ran outside. He was soon forced back by an exterior tidal wave, dragging a multitude of debris. The water filled the hall within seconds. The gentle people of the perfect town, who knew no pain or fear, watched their drowned world darken slowly before them.