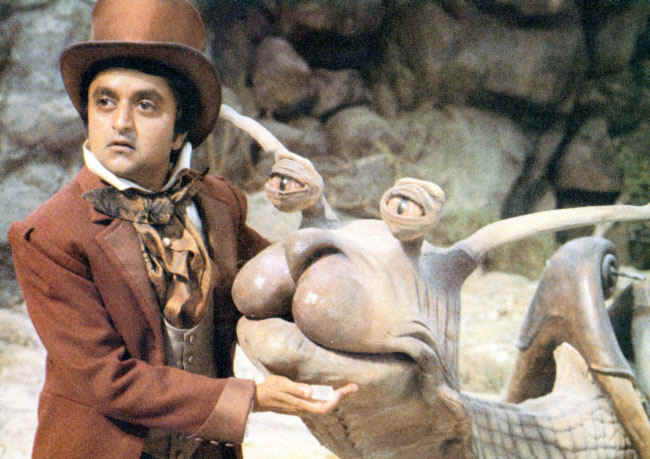 Seems like this guy survived from The NeverEnding Story – well, at least in this tale. Image // Warner Bros.

Psst, came a sound from the doorway of the house on the corner of the street. Psst, James. It came again.“Who goes there?” James paused. “My god, who actually says that any more?” He added in spoken thought as he reached the place where the sound emerged from.He looked around the corner but there was no one there.I’m right next to you, you dimwit. Turn around!He span around to where the voice came from, the only thing there was a slug, which was sat at eye level on the wall to his left.That’s right, I’m a slug, get over it. Now, I have some important news for you.“What the…” The slug’s head turned towards him, and a smile came to its lips. “You’re smiling at me, am I asleep or something? This isn’t happening.”Get over it. But seriously, I have some news you may be interested in.“You’re a slug! Slug’s don’t have ‘news’!”And you’re an ignorant human, one who believes they are the only species that has breaking news.. But guess what? I’m over it, so you should be too, so shut up and listen to me!“I… I’m sorry?” I said shut up and listen to me!

“But the world isn’t going to end. Seriously, are you stupid?”Says the man talking to a slug. Have you ever thought that things that you never thought possible could actually happen like, I don’t know, being able to talk to a slug or the world ending?“Right, what’s on this piece of paper then?”Like I’m going to tell you. I actually kind of like this planet, I don’t really want it to end.“You seriously believe that the world is going to end if this word is said to me, don’t you?”I’d casually like to point out that you seriously believe that you’re talking to a slug.“Touché.” The side of the slug began to bulge and tiny but perfectly formed fingers began to emerge, then a hand, then an arm. The fingers held a small square of paper. James stared in shock.Take it then! The slug shouted.He obeyed, took the square, and began to unfold it. An A5 piece of paper containing one word was printed on it.“He-“Don’t bloody say it! Do you want the world to end?!“Not really…”Don’t say it then!“How can one word said to, or by me, end the world?”Don’t ask me, I don’t know. I was just asked to pass on the message!“Pass on the message? From who?”Falkor, the Luck Dragon.“As in the long pink fluffy thing from The NeverEnding Story?”Yes, I mean, no, yes… OK, it doesn’t matter!“But…”But what?James’s phone rang in his pocket.

Don’t say it! The slug hissed as he answered it.“Hi?” James said down the phone.“Hello, I’m looking for Mr…”The world began to shake as the sky quickly turned from crystal blue to a sickly green.Thanks for nothing dude.The world continued to shake, cracks on the ground began to widen and buildings fell down. The slug vanished and the world imploded.*Slug watched the spectacular implosion from space. He settled between the shoulder blades of a long, pink and fluffy creature as he glided through the solar-system.Don’t say I didn’t warn you. He chuckled. They never listen.

Originally a Half Hour Challenge entry, Fantasy Girl’s ‘I’m a Slug, Get Over It’ is quite a fetching short story. Not only does it sneak a reference to The NeverEnding Story – a firm favourite among many ’80s and ’90s children – but it has an anthropomorphic slug telling us that the world will destruct. Honestly, it had us from before the word hello, and is a fantastic short science fiction story to end our May the Force Be With You content special.  If you enjoyed Fantasy Girl’s writing, make sure you have a look at ‘Commune‘ and ‘Sophie in Wonderland‘.