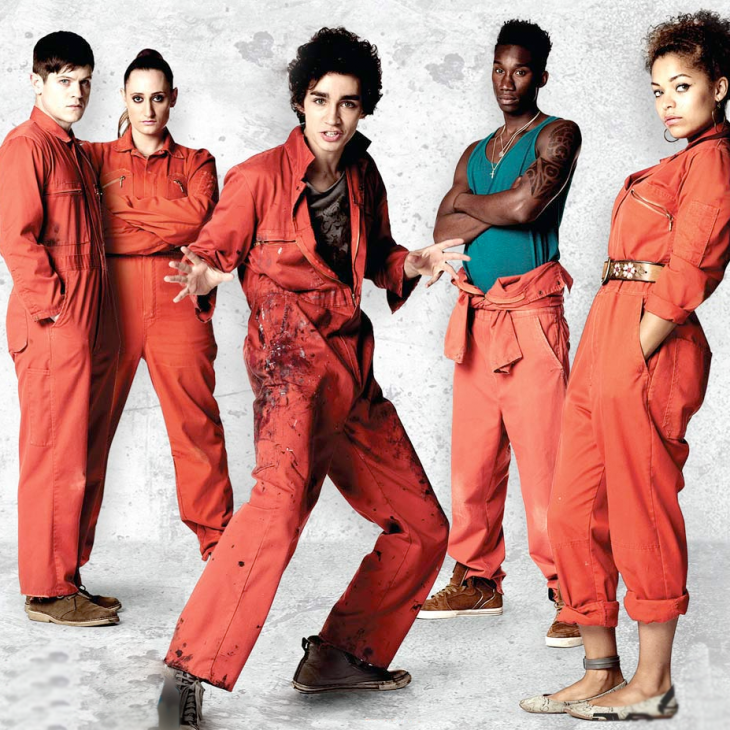 We think these misfits would fit in quite well at The Clot.
Image Courtesy of E4.com

The following was extracted from media records in accordance to reviewing the actions of The Clot – dates have been marked in chronological order above each extract for easy viewing.

Wed, 9th May 1990
Today marks the grand opening of The Clot: Mark Howser’s Child and Youth Correctional and Detention Facility. Three years in the making, it is expected that this centre shall calm the streets of the unwanted crime specific to…

Sat, 12th May 1990
Capable of housing over one hundred thousand wrong-doers at a time from birth all the way up to eighteen years, the challenge of creating a space of justice for young people has surely met its match.

Wed, 21st Oct. 1992
The first youth who was released from The Clot has gone the last six months without resorting to her former self. It is reported that she has acquired a job and is of working class status. Originally sent there for a series of petty theft, The Clot is acclaimed for her remarkable turnaround in this climate of…

Fri, 30th Oct. 1992
Since the successful release of Clara Hawkers, a former petty thief, parents have been sending their children to The Clot in droves. From babes to adolescents, it’s clear…

Sun, 9th May 1993
In the three years since The Clot has opened, the crime rate on the street has dropped to an all-time low and has been that way for the last four months. The Voice of the Law himself applauded their statistics and proclaimed that The Clot has been a turning point for society. He also stated that, despite certain policies within The Clot, it has proven to be an effective measure against…

Wed, 24th Aug. 1994
This morning it was discovered that a suicide has taken place within The Clot. The sixteen-year-old male attendant was discovered in his bed having taken his own life. The Clot is a hive of activity trying to uncover the reason behind his death. Mark Howser has yet to comment on this tragic…

Thurs, 26th Aug.1994
…uproar within the city about the suicide. The identity of the youth has not yet been released but his initial crime was stealing domestic animals and killing them in mad rituals. Officials are now starting to question the attendant’s state of mind at the time of the suicide rather than suspecting the policies employed by the staff in The Clot.

Wed, 15th Mar. 1995
The reports released seven months after the shocking suicide within The Clot state the suicide was a result of an emotionally disturbed mind – the only fault with the management of The Clot was a lack of surveillance within the sleeping areas. Measures are now being brought in…

Wed, 11th Dec. 1996
Disturbing news today as The Clot Facility is strained to the limit as space is scarce. It is now having to refuse entry to new attendants as there is simply no space. There are speculations that The Clot’s ‘Golden Age’ has come to a crushing end as the crime rate once again rises on the streets. Mark Howser is refusing to comment at this point about the uncertain future of his facility.

Wed, 1st Jan. 1997
…breakthrough today as Mark Howser announced the finishing touches are in progress on his new building. Mr. Howser stated that he purchased the old mall building some time ago and has been renovating ever since. The renovations are due to be completed within…

Sat, 4th Jan. 1997
…and in addition to the new building, The Clot will be able to house up to four hundred thousand attendants at a time. This is fantastic news all around as parents are now sending their children to the facility in startling numbers.

Mon, 21st Sept. 1998
As the Voice of the Law, I make a plea to parents to think of The Clot as a last resort for children, that the children in question have committed actual crimes and need genuine help. I urge you not to use The Clot as a measure for simply getting rid of unwanted children.

Thurs, 24th Sept. 1998
In response to the Voice of the Law’s plea, The Clot has introduced a new policy that allows them to refuse admittance for children under the age of seven. In addition to this, Mark Howser announced that evidence of a crime must be given for the child to become an attendant.

Fri, 25th Sept. 1998
Riots have taken place in response to Mark Howser’s latest policy. It seems that the public are outraged at this new policy, so much so that they don’t feel shamed to treat their children in such ways as…

Sun, 27th Sept. 1998
…also, riots soon dissipated after Mark Howser took to the stand and accused the public of “forsaking their children like animals for no given reason”. Many people were not pleased with this turn of events, but it seems to have had little effect on the amount of children who are still being admitted to The Clot.

Tues, 9th May 2000
Since the expansion of The Clot, the crime rate has once again dropped to outstanding low levels. As The Clot celebrates its tenth anniversary, the future looks very optimistic for all generations at this point.

Wed, 12th July 2000
Disagreements between parents and The Clot management have erupted into an all out debate. According to leaked information from The Clot, parents were refusing to allow their children to be released, even though their term was finished and all work completed. This was occurring in up to thirty per cent of all attendants at a given time and reoccurring for years for some attendants. The Clot management are now seeking…

Thurs, 27th July 2000
In alliance with the Courts and the Voice of the Law, The Clot has passed a new policy that attendants can be released from The Clot without parental consent. 24 per cent of all attendants were automatically released following this measure.

Wed, 2nd Aug. 2000
In contrast to past measures, the public haven’t reacted to this new policy strongly. Although many parents are displeased at this news, they seem to recognize a need for The Clot and so respect its decision. Crime is still at a low level and it has become an everyday expectation as…

Sat, 15th Feb. 2003
Outrage and shock are words that spring to mind today as a mass suicide was discovered this morning within The Clot. Thirteen male attendants were found in a library, each bearing an armband with the face of a goat on it. Officials are swarming all over The Clot, suspending all new entries and release until it is know what caused these suicides.

Wed, 11th June 2003
No reports have been released in the past few months that followed the discovery of a mass suicide within The Clot. However, officials and the Voice of the Law have stated that it was the work of a cult, and that The Clot is back open and resuming former practices. The public seem satisfied at this comment, not responding to…

Mon, 9th May 2005
The Clot today celebrates its 15th anniversary, and Mark Howser has reflected on the history of The Clot stating that, “despite unsavoury setbacks, The Clot is now established within society and the future has never looked so bright for the younger generation”.