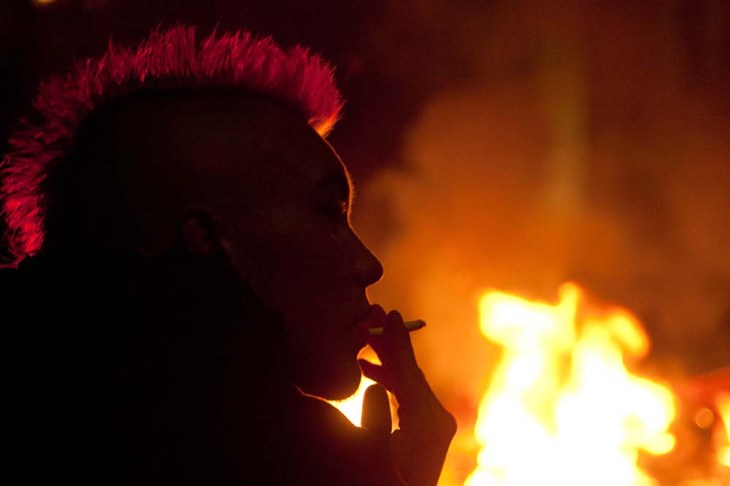 Destruction in many forms.
Image courtesy of: http://www.crazy-ivory.de

A little silvery trickle of water began to run from the bent pipe. It was surprisingly tough; the dull, stained copper was standing up to all the force Tack could put on it. He held the pipe by the brass tap on its top. Thinking about it, Tack saw that whoever had put this in was a terrible engineer. How they had expected a fairly flimsy, half-inch pipe to stand up to everyday use without so much as a bracket to support its length against the wall was a mystery compounded by the fact that they had evidently expected it to stand indefinitely, since, most of its length was buried in concrete making any repair an undertaking not worth the effort.

Needless to say, it would not stand indefinitely. Tack wrenched the pipe back and forth through fully a quarter of a turn by its length, levering against the concrete which collared it at the base. As he did so the trickle became a gently arcing thread glittering in the streetlight.

There was a visceral satisfaction in destroying something; some piece of public infrastructure, be it wrenching off a tap or dropping a mattress from the overpass, or watching thick, smoky petroleum flames begin to lick from the top of a litter bin. Pointless destruction of pointless things. For nothing had a reason, nothing had a goal which stretched beyond the void which was the end of all things. People abhorred destruction because they had been told to. Society constructs, it builds, moving toward a greater goal, went the mantra. Freedom is consumption, and labour, in a perfect balance. The freedom to work. The right to a mortgage. A neat lawn. A tidy funeral.

Dab and Fen had finished smashing the lock from the cemented shell of a bin and the plastic inner container now lay bent and crippled on the ground, trails of stinking rubbish strewn along the sea defense. They turned their attention to Tack’s tap. Tack braced against the wall with one foot, and wrenched the pipe as Dab and Fen beat and kicked on the anchored end. Slowly, reluctantly, the pipe twisted and sheared free, a metallic crunch heralding its defeat. Foamy, pure white water ejaculated from the ground in a knee-high column, then ran down the concrete slope to the beach, muddied by dust and sand and grit.