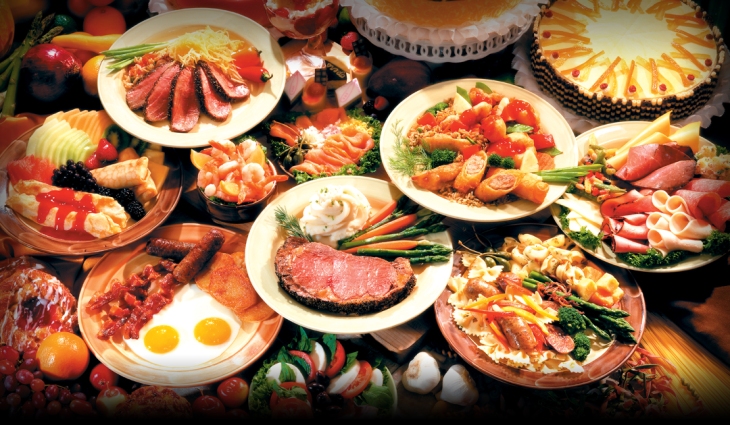 Could you eat all this? Image courtesy of sunsetstation

There’s a feast laid out before him, but he barely takes the time to let his eyes or mind register it properly before his hands have reached out and the first bite is in his mouth. It’s an apple, he realises, chewing energetically and swallowing it as fast as he can – eager to make room for the next mouthful.

Three more bites are enough, and he’s sick of it. The apple is delicious – red and shiny with a perfect crunch, sharp and sweet to the bite, but there is so much more on the table that requires his attention. He drops the apple and reaches out for a loaf of bread, tearing it in two and buttering it roughly before throwing it into his ready jaws.

The bread dries his mouth, and suddenly he is thirsty; his throat drying up too soon in the meal. His left hand finds a flagon of wine while his right is reaching for a dish of carrots, and he pours it straight down his throat without hesitation. It glugs as it makes his way into his body.

Already, his bloated face is reddening. He polishes off the carrots with no more than the odd courtesy chew, and reaches for the platters of meat before him. They have been prepared to be eaten immediately, and as he tosses turkey and ham slices into his maw, the first trickle of saliva makes its way around his lower lip, and dribbles onto his chin.

More wine. More bread. More meat. He grabs a chicken leg, stripping the flesh from the bone and baring it completely. The bone, useless to him now nothing edible remains, drops to the floor and is forgotten. As the table clears and the meal is over, one small fact does not escape this man. He may be sated, but he is not happy – he is alone.

Gluttony was written by Lilith several years ago, as an experimental piece to aid her general writing – we love her disgusting descriptions! If you’d like something a little gentler of Lilith’s, please check out her most recent fiction 35.2.