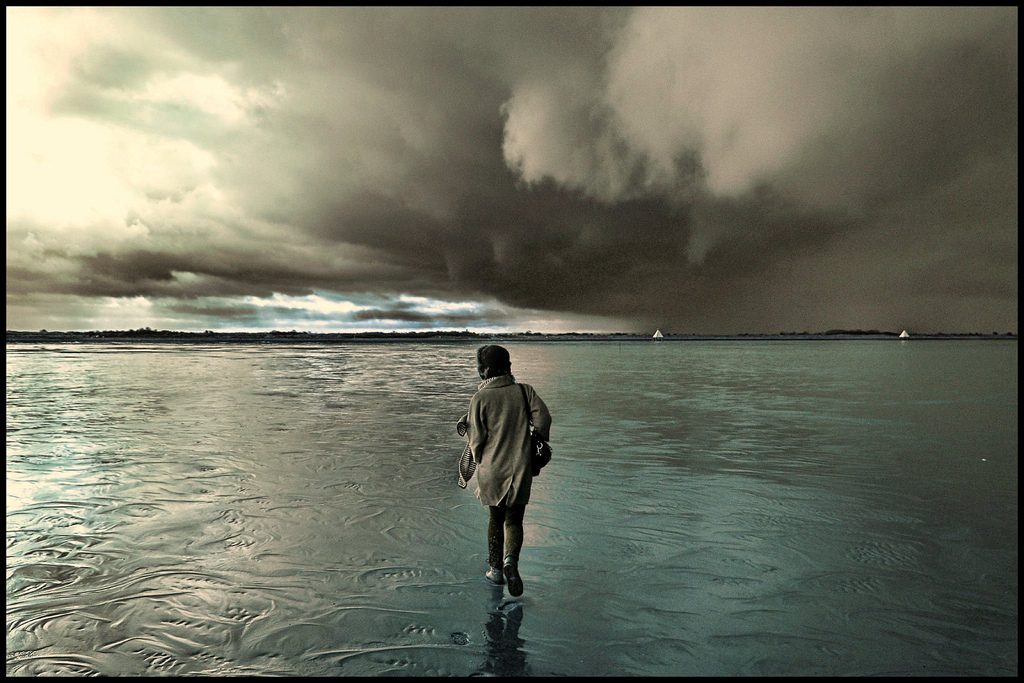 The moonlit waves swashed back and forth over a stretch of sand two miles long. Gentle and soothing, its sound a dull wash in the back of the mind. A clear night’s sky stretched out above like a black canvas filled with flecks of white paint. Not a soul to be seen, the sandy shore was smooth and untouched, ready to be shaped by the footprints of hundreds of visitors the next day.

A wooden pier stood old yet proud, stretching out to sea like a great finger, pointing to a distant unknown. Empty but for a jet black piano that rested at the pier’s end. Grand it stood there, waiting to perform to the world under the great spotlight of the moon.

A figure appeared, a shadow, gaunt and tall. It stood beside the piano, looking around before sitting quietly at the keys. It had no discernible features, seeming to almost change in shape as it stretched its arms out to touch a key. A single note resonated, sending ripples through the water beneath. Another note, higher this time; more ripples.

Note after note came, each one as spine-tingling as the next. Yet there was no song, no melody. It was as if the pianist was lost, tapping note after note, getting faster and faster, more angry and frustrated, no sense of rhythm. The sea began to surge beneath the disgruntled figure, moving this way and that in a swirl of confusion. Each note causing the water to jump in a mist of rage.

Then, in an instant, it stopped. The figure slumped down, defeated. The sea receded and the calm from a moment ago returned. Sitting motionless, the shadow was fading and re-appearing as if breathing deeply, heavy with thought.

A sound. The pianist turned its head suddenly. Another figure, standing upon a huge rock at the water’s edge a short ways down the beach. With violin and bow in hand, it quickly slid the bow across the strings creating a shrill, rough sound that clung to the air around it. The pianist replied wearily with a long deep note.

A moment passed. The violinist tentatively created a sustained and wafting sound, and the air around breathed effortlessly as the music ebbed and flowed. The pianist joined in, beginning to find rhythm and fluidity and the two instruments began to work together, one following the other. The noise grew louder and stronger as the musicians began to feel more confident in themselves and each other. Melodies grew and changed, rapid one minute and slow the next.

As song filled the air, so too did the air begin to move with it, the sea erupted around the pianist like a sudden storm. Water crashed around the pier, excited and spontaneous. The two figures were speaking and the elements were listening.

They played together, minute upon minute, hour upon hour. A symphony of sound, wind whistling and the sea seething, working together to create something greater than the sum of its parts. The music between the two musicians was not meant to have an audience; it was a love letter to fall on only their ears, yet played on the world’s greatest stage. The pianist’s hands moved in a blur. Hunched over the ivory keys, the figure was pouring his soul into the song and the result was magic.

The violinist, head bent and arm moving to and fro, created a merry song that danced from the strings and into the air. The sensuous sound wrote words of love into the wind. The two instruments were symbiotic, crafting sweet music together from night ’til the approaching dawn. A conversation of song.

The black of the night slowly turned crimson as the horizon came alight, setting the sea on fire with the approaching sun’s rays. The violinist stopped suddenly, and the pianist turned to its musical partner perched upon the rock, pausing in anticipation.

The violinist turned to face the pianist before bowing long and deep, and letting its violin and bow drop onto the warming sands beneath, crumbling away into nothing. And with that, the early light engulfed the figure leaving nothing but a slight breeze behind.

As the violinist was engulfed, so too was the pianist, not by light, but by rage. It hammered its fists down on the keys, returning to its ways of frustration and anger. This time the sea grew monstrous, huge waves rolled high and crashed into the pier from all sides sending spray everywhere, covering the pianist in a mist of sea and salt. The noise from the piano grew and so too did the waves. Suddenly the pier was engulfed completely and with it the piano and its companion, swept away into the sea, drowning in the sorrow of loss. The loss of that perfect night, never to be recovered.

New contributor Warp Spade’s short fiction is eloquent in word choice. Wrapping together the beautiful sounds of music with the frenetic rage of the sea works so wonderfully, it gives us the chills just reading it. The personification of the sea within his short story keeps us gripped to the certain tragic conclusion. But all things come to an end, sadly, we’re just happy we got to read such a great piece. If you enjoyed Warp Spade’s work, feel free to leave a like or a comment below. 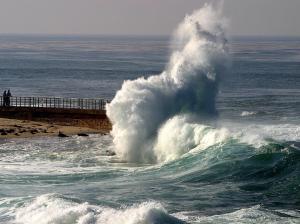 The crash of sea waves at La Jolla Cove in California.
Image Courtesy of dreamlajolla.com

Here where the sea stands,
alone,
calmly.
I wish there was a wind,
a heated wind,
to crash the silence.

This wind,
a life savior,
will turn this sea to a raging monster
to defeat every living
with its infinite might.
It will change the course of being,
the seasons of love,
and the roles of passion.

This sea,
when it moves
It will demolish the islands,
and bring a new millennium,
a new society,
and a new age.

Yet,
the sea is still calm
and alone.

‘Here Where The Sea Stands’ is Arwa’s first poem published in Inkblots. As the English language is not Arwa’s mother-tongue, she was inspired to write poetry as a way of understanding our language, and also feels more comfortable expressing herself with it. We love the simplicity depicted throughout the poem, and hope to see many more poems from Arwa in the future.