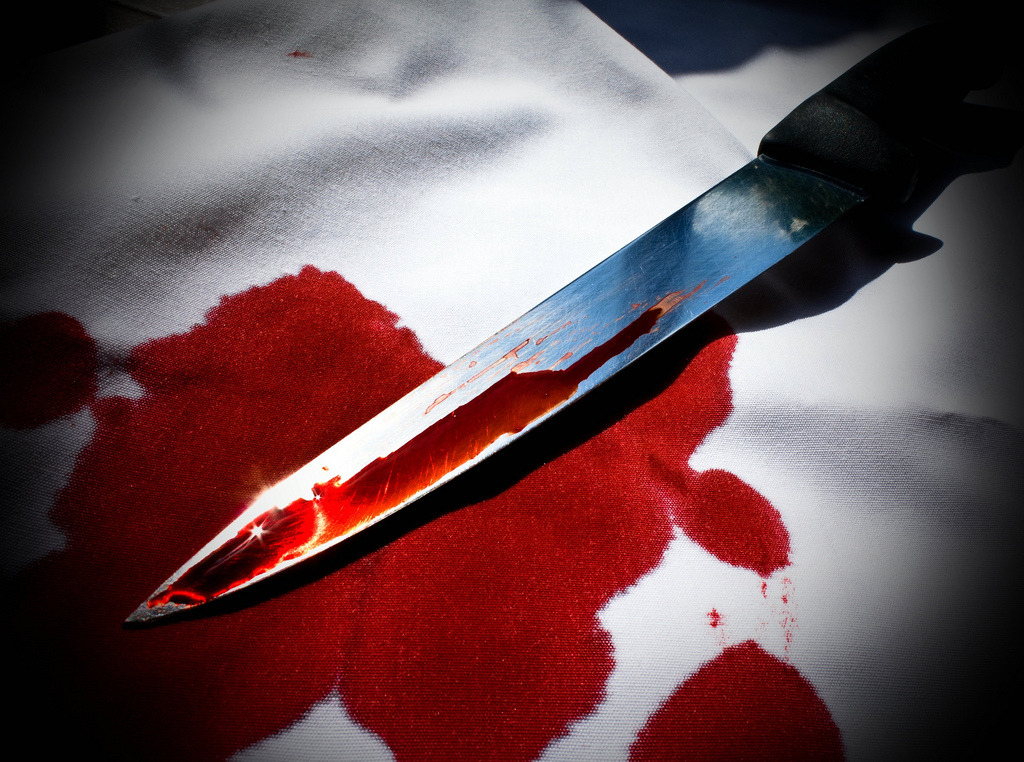 She would not turn to them. And while she spoke to them, softly and slowly, she would not turn. They’d arrived a little after nine. Seven months filtered down to this. She sat hunched in a chair towards the window, watching the grey skies and the rain trickle down the glass.

“Perhaps I was a fool.” Her voice whispered to them. “Perhaps you should have never come.”

“Catherine, this is a chance to tell your side of the story.”

Catherine Green, reveals all. The headlines would be bold, brash and bloody. People would ask for his autograph. The fearless reporter willing to do what no other would. The genius who revealed all.

The recorder lay beside him on a table. The orderly had brought tea and left them alone in the mint coloured room.

“There was once a girl who believed she had cancer, so she took a knife from the kitchen cabinet and stabbed her husband seventeen times.”

Catherine chuckled at the thought of her infamous story, while the journalist watched her with his fingers laced under his chin. The jury had not believed her pleas of sanity; there was never a lump, never a young doctor, nor any proof of her appointment. A deranged woman who’d languished for nearly two decades within the walls of the mental unit chosen for her. Since her imprisonment there had been no signs of a relapse, nothing to suggest mental illness and yet the doctors’ reports complained of her unwillingness to accept reality.

“We can never go back. Do you understand?” Her hand was papery and dwarfed by his own. Catherine was once a beauty, but it had faded now – cheeks gaunt and eyes watery, she turned away from him, a sigh caught in her throat.

“Catherine, I’m here to let people know your story.” He was here for promotions, cars and money but she still smiled and thanked him before clearing her throat.

“This was after the doctor’s office?”

“Yes. He was such a handsome man, though I never saw him again. I remember there was a light above me, it was swinging you see, casting shadows on the far wall.” She ran her fingers through brittle hair before reaching for the glass of water left on the side.

“He called himself Wednesday. Such a handsome man. Such a gentle voice.”

“Wednesday, you refer to him as the umbrella man?”

“It was a black one; he would lean on it as he spoke.” Her voice lowered in a mockery of an English gentleman. “Call me Wednesday sunshine. It’s not my name but call me it all the same sunshine,” she laughed to herself before turning towards him, her voice regaining the gentle, soft quality he expected of her. “Do you wish to find him?”

The journalist blinked at her suggestion as her hand touched his own. Her face furrowed and she drew a tongue across her chapped lips.

“I advise you to leave. Drive away. Find a pretty girl and marry her. Don’t stir the hornet’s nest. When you know of him, he knows of you.” Her voice had become a harsh whisper, her eyes fixed with his own. Her nails dug into his skin.

“Catherine,” he took on the voice he used with all clients, one to reassure and coerce the story from them. “Please, this is for you. A chance to tell your story.”

“Bah.” She moved away from him, crossing her arms. “This is for you and your bank account. Don’t think I don’t know. You know, I was imagining rape or death but the doctor only spoke to me.”

“Truths,” she hissed the word and tapped the side of her chair. “He will show you hell for his own amusement. He spoke of so many others but wouldn’t let me see them. Once, he threw a tea party and fed me. But what did he feed me? To be honest, I didn’t dare ask. I kept finding hairs, red ones, soft like a child’s.” She turned away her eyes down as she shook her head. “ But I would never ask about what he gave me or what he called his failures.” The mock accent returned as she tilted her head back.

“I judge you dull.” Bringing her hand to her eyes she wiped away a phantom tear, her voice pleading as she spoke again. “So many names, he’d tell me them again and again, all failures. All unwilling to do what must be done. I was his play thing and he made me kill Thomas.

“I loved Thomas in a way, I married him after all and yet I wanted to survive so badly. Though he said I was becoming dull, so I amused him the only way left to me. I killed Thomas to amuse him.”

“What happened to you?” The words left the reporter almost as a prayer. He didn’t believe half of her story, he’d done the research.

Catherine Green had called into work, then spent an hour in the bathroom before walking to the kitchen, grabbing a kitchen knife, and stabbing her husband seventeen times in the chest. The police found her with the knife in her hand, whispering to herself about proving herself “worthy”.

“I was broken.” She stood with a great effort before moving closer to the window
“He instructed me.” Lifting her sleeve he saw the crisscross of wounds, they glared at him in pale lines. “Look for him and he will find you.”

“Why did he find you?” The reporter asked as Catherine let her sleeve fall and placed a hand on the window.

“I needed to learn. I never considered my worth beyond breasts and a pretty face. Life is so beautiful.”

Catherine dissolved into madness then, screaming and yelling, before the orderlies sedated her. It was clear he wouldn’t get clarification today. Pulling out of the hospital car park he reflected.

The case of Catherine Green had shocked the world of 1995; she was beautiful, white and blonde. She’d seemed so stunned and confused in those early pictures that people still doubted she was a real killer. The Rettendon murders, had taken her off the map, three drug dealers a far juicier story for those wishing to complain about the state of society. And yet something about a beautiful young woman driven to murder would always inspire people, including himself.

While driving, he formed the structure to his article: human nature versus the supernatural “hidden” killer. Paramurders would take it – a terrible magazine for aging housewives who believed in every new age trend. But he still wished to write the true hard-hitting stories of murderers and serial killers. Not stories about men with umbrellas.

It took him two hours to return to the office. Sitting down he felt his eyes glaze over, he’d wanted so much more out of Catherine Green. He didn’t want to work for the Sunday Reporter for much longer; freelance work allowed him a chance to earn more and yet he only needed one great story to propel him to the heights of journalistic stardom.

Catherine Green was meant to be such a chance and she had proven to be as mad as a hatter. He let his head sink as he opened his emails, wondering what wonderful words of wisdom his boss could provide.

Sifting through his emails quickly, the journalist stumbled upon an interesting find – an email from Catherine Green’s hospital.

Hear of me I know you. Speak of me and you will find. Search for me and I will come. I have looked into you and I find you dull. I will not play with such a thing long but I will play if you so wish.

He stared at the email before him and was chilled to the bone. Perhaps it was a joke, perhaps it wasn’t. But he knew one thing for certain, the truth of the umbrella man was now within his grasp.

A chilling tale, Mulberry Way sets the scene with a curious look into the life of Catherine Green – a female serial killer bent on revenge. With a madness that breathes life into her character, Lockmaker has written a fantastic thriller that just leaves us hungry for more. Just who is this umbrella man, is a doctor, an imaginary psychopath? Perhaps we’ll find out one day. But in the mean time, if you enjoyed Lockmaker’s work, make sure to view her other published work on Inkblots, “Dear Mister Nice Guy”.